Star Trek turns 50 this week! And The Sci-Fi Christian’s resident unrepentant Trekkie, Mike, has teamed with up J.W. Wartick, author of the Always Have a Reason apologetics blog and fellow Trek fan, to celebrate. Through September 8, J.W. and Mike will be cross-posting their 25 personal favorite moments from the length and breadth of the Star Trek franchise. From the original series to the Kelvin timeline, these 50 moments in total are among the highest highlights Trek has to offer.

Some are iconic scenes that show Trek’s true heart.

Others have special resonance for Christian Trek fans.

Still others are just a whole lot of fun.

We hope you enjoy counting down to Trek’s golden anniversary with us!

Today, both lists begin with some up-to-the-minute moments, testifying to Star Trek’s continued vitality, five decades after its debut. They also spotlight Trek’s abilities to tickle viewers’ funny bones as well as prompt them to deeper thought.

Finding out that Star Trek was returning in series form was massive news for Star Trek fans. It’s always been the format Trek has excelled in, and I know that the announcement of a new series was one of the best moments I’ve had with Star Trek.

The perfect fusion of “nuTrek” and old: Instead of firing phasers or photon torpedoes, our heroes unexpectedly use music as a weapon against Krall’s “bees”—and the song of choice? The Beastie Boys’ “Sabotage,” a callback to the 2009 film. (We all like the beats and the shouting, Jaylah!)

Data shows up at in a village with no memory of who he is, or that he’s carrying a container full of radiation poisoning. When the camera pans onto that case with the radiation warnings on it, it is one of the more chilling moments in TNG. 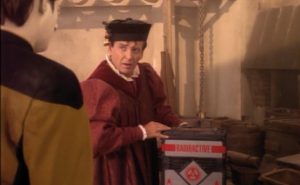 One of Trek’s most haunting examinations of war and its costs. Jake and Nog’s friendship is tested past the breaking point aboard a Starfleet vessel crewed by cadets who want to become (depending on who you ask) heroes or martyrs. A powerful, not preachy morality tale in Trek’s finest tradition.

The Borg are perhaps the most feared of all Star Trek villains, and for good reason. Here, however, viewers are introduced to a character who would later become a seeming paradox: a sympathetic, rehabilitated (?) Borg.

An overrated TOS episode is redeemed with witty scripting and ingenious, seamless editing just in time for Trek’s 30th birthday. We learn those fuzzballs kept raining down on Kirk because, off camera, time-traveling Sisko and Dax were tossing them aside in order to find a bomb!

Data experiments with humanity, but it turns out that much of his work is just that—experimentation. When his girlfriend breaks up with him, his utterly bleak—and apparently inhuman—reaction is to delete the program routine he wrote to date her.

A rollicking good time in this episode of TNG, wherein Q attempts to give Picard a love interest by transporting him and select crew members to Sherwood Forest. If you start this episode in the middle, you’d be confused about what you’re watching.

Arguably the funniest of Trek’s many trips to the past, wherein we learn that none other than Ferengi crashed in Roswell in 1947. “I’d always heard primitive hew-mons lacked intelligence,” Quark observes, “but I had no idea they were this stupid!” Out of the mouths of extraterrestrials.