As The Sci-Fi Christian’s resident unrepentant Trekkie, I’d be falling down on the job if I didn’t offer my two cents quatloos about CBS’ unveiling of the teaser trailer and logo for its new Star Trek series. The first episode will debut on the Tiffany Network before the rest of the series beams over to CBS’ online streaming service.

My first thought? Even for teaser trailers, this one’s pretty skimpy. No one reading this blog is likely surprised to learn a new Star Trek series is on the way, but this “trailer” amounts to little more than an announcement of the news.

My second thought? Although there’s not much here, what is here is, visually, very engaging (with apologies to Captain Jean-Luc Picard). It’s major influence is, without question, the closing credit sequences of the J.J. Abrams Trek films—a warp-speed, whiplash fly-by of worlds unknown, including that one planet frozen in mid-explosion (maybe it’s supposed to be Praxis, the Klingon Empire’s doomed energy moon?)—but it also evokes the weekly opening credit sequence of Star Trek: The Next Generation. Still, it’s a dazzling ride, beautifully realized. If we get to see effects work like this on a weekly basis when the series arrives, we’ll really be in for a treat.

My third thought? Despite the welcome presence of Alexander Courage’s original series theme at the trailer’s end, this series will—and should—be something new.

For the first time in three decades, since “Encounter at Farpoint” premiered, a new Star Trek series will have no overt ties, beyond its title (in a harsh, angular typeface that mashes up the original series’ and The Next Generation’s title fonts), to what has gone before. The onscreen tag line sets a high bar:

Not even “Encounter at Farpoint” aimed to break so completely with Star Trek’s past: It was set aboard a U.S.S. Enterprise, had a prominent Klingon character, and included a cameo by DeForest Kelley.

But the 2017 Star Trek series will, if it keeps this trailer’s promise, be something different. Sure, the familiar Starfleet delta shows up—but notice that fracture on the right-hand side, through which some Abrams-worthy lensflare streams? It’s as though the light of something new will not be denied—the future as an unstoppable, illuminating force, breaking through what’s comfortable and known in order to reveal new vistas of possibility. 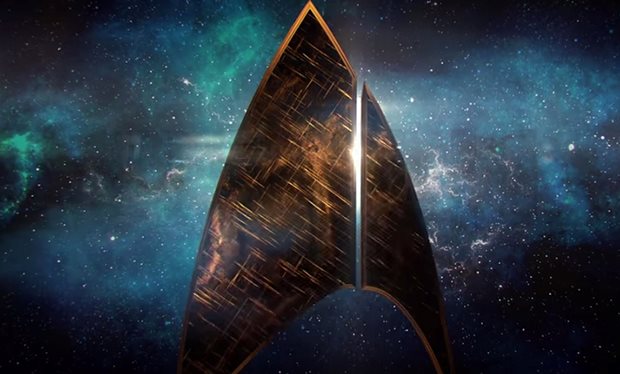 Okay. Maybe that’s a lot to expect from a TV series that is, in the end, another iteration of a fifty-year old franchise, however much I happen to love it (even when, as in recent years, it’s driving me bonkers).

But it’s not too much to expect from God. God is in the business of breaking through what’s comfortable and known, what’s familiar and safe, in order to bring us into a better future. As God announced through the prophet Isaiah:

Do not remember the former things,

or consider the things of old.

I am about to do a new thing;

now it springs forth, do you not perceive it?

Everyone’s A Star Trek Fan—Even You

Do you want to know something?

Like a lot of Star Trek fans—or fans of Star Wars or Superman or any well-established property, for that matter—we all tend to want what we’ve always known, what we’ve always enjoyed, what’s always made us happy before. That’s human nature. And there’s nothing necessarily wrong with wanting security and stability—unless and until it gets in the way of our welcoming the light of God’s future, which is on a direct interception course for us and for the world.

What are you looking for from the new Star Trek series? Leave a comment below to join the conversation!

3 comments on “What Can Christians See in the New Star Trek Series Teaser Trailer?”