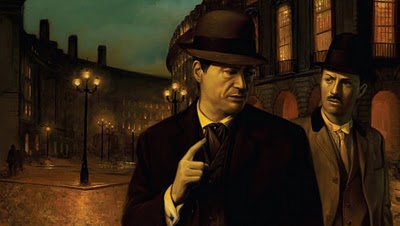 Sherlock Holmes isn’t a science fiction or fantasy character. Except when he is.

As I’ve mentioned before in this forum, fans of literature’s first and most famous private consulting detective very often turn out to be fans of genres more speculative than detective fiction, as well. And when those fans also turn out to be first-class writers, some wonderful stories result. The Improbable Adventures of Sherlock Holmes (ed. John Joseph Adams, Night Shade Books, 2009) collects over two dozen panache-filled pastiches, many of which put the rigorously rational sleuth in situations that are far from “elementary.”

You should know, however, that not all the stories live up to the expectations raised by the anthology’s title. By my count, at least half of the 28 tales are, in fact, fully probable adventures. This observation is not so much cause for complaint—initially far-fetched circumstances that yield to logical examination are, of course, a staple of Conan Doyle’s Holmes “Canon”—as it is a gently spoken caveat emptor. If you are expecting a volume that is full of nothing but, say, Holmes in outer space or the future or the mysterious realms of the spirits, you may be disappointed. Even Stephen King’s contribution, “The Doctor’s Case,” which leads off the book—and by the end of which Dr. Watson has “solved [his] first case, become an accessory to murder, and [all before] tea-time!”—contains no horror (other, that is, than the sometimes too-considerable horror of the fallen and sinful human heart).

But, rest assured: these fully explicable tales are exceptionally well-written and enjoyable. What else would one expect from such authors as Vonda McIntyre, Anthony Burgess, Michael Moorcock, and Barbara Hambly, among others? Sharyn McCrumb’s “The Vale of the White Horse,” which stars a new, female character who proves Holmes’ eccentric and intellectual match, deserves special mention as a mystery that is a joy not only to puzzle out but also simply to read. McCrumb’s economy of characterization and eye for lush detail make her story one of the volume’s standouts.

McCrumb isn’t the only author who takes the opportunity to provide the feminine perspective usually lacking in Holmes’ world. As most Sherlockians might expect, Irene Adler makes several, mutually contradictory returns, some of which are satisfying (“A Scandal in Montreal,” by Edward D. Hoch, brings an elderly Holmes out of retirement to North America’s shores in order to assist Adler’s college-aged son), others of which aren’t (“Commonplaces,” by Naomi Novik, seems to me one of two strictly “Mary Sue” stories, involving little more than a passionate romantic rendezvous between Holmes and “The Woman”). Laurie R. King’s entertaining “Mrs. Hudson’s Case” does not feature Irene, but instead brings King’s character Mary Russell (from her novel The Beekeeper’s Apprentice) to the fore, solving a mystery for the great detective’s long-suffering landlady. King does great credit to Conan Doyle’s creations while artfully showcasing her own.

While some of the “rational” stories do allow for an ambiguous hint of the fantastic—Bob Rogers’ “The Adventure of the Pirates of Devil’s Cape,” for instance, in addition to being one of several “lost cases” inspired by throwaway references in the Canon, features a particularly haunting twist at the end worthy of a “Twilight Zone” episode—it is the flat-out science fictional and speculative stories that most captured my attention. Here are my votes for the volume’s “must reads”:

“The Horror of the Many Faces” by Tim Lebbon opens with Watson’s shocking discovery of Holmes bloodily butchering a man in a fog-filled London alley. Of course, all is not as it seems—but the explanation of why Holmes acts as he does brings very little comfort, for his deeds are the harbinger of a Lovecraftian invasion of evil that is truly terrifying.

“The Adventure of the Other Detective” by Bradley H. Sinor is an incredibly clever tale of a parallel universe in which Professor Moriarty plays the hero. Knowing this premise in no way spoils the tale—the switch is revealed early on—and Sinor sustains the concept so successfully that one would willingly read more cases starring his mirror Moriarty.

Neil Gaiman, as one might expect, turns in a terrific tale with “A Study in Emerald.” Gaiman rings not-quite-familiar changes on the Canon, proving he is indeed a master of literary illusion. He will fool you. And you will enjoy it.

With “The Singular Habits of Wasps,” Geoffrey Landis may deliver my favorite story of them all. It is a terrific mash-up of Sherlock Holmes with (are you ready for this?) not only Jack the Ripper but also The War of the Worlds. Reducing the premise to its bare bones does the story a disservice; read it and see if you don’t agree that the meeting of these three modern mythologies doesn’t end up feeling so inevitable, you wonder why no one’s thought of it before. (Tony Pi pulls off an almost as equally admirable meeting of the myths in “Dynamics of a Hanging,” wherein Charles “Lewis Carroll” Dodgson is implicated in the murder of one Arthur Conan Doyle!

With Sherlock Holmes: A Game of Shadows in the cinema, the second series of the BBC’s Sherlock having made a splash across the pond and coming soon to American public television, and CBS prepping its own 21st-century update of the Canon, it’s a great time to be a Sherlock Holmes fan. Not all the excitement is on screen, however, as The Improbable Adventures of Sherlock Holmes attests.

3 comments on “Recommended Reading: The Improbable Adventures of Sherlock Holmes”