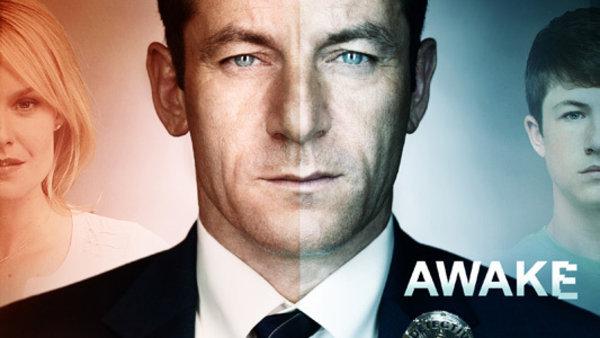 This TV season’s latest procedural with a twist (joining the ranks of Person of Interest, Grimm, and Alcatraz) is Awake (NBC, Thursdays, 10 PM ET). Detective Michael Britten (Jason Isaacs) can’t tell when he is awake and when he is dreaming. Following a catastrophic car accident, Britten begins living what feel like two equally real, equally detailed and authentic lives: one in which his wife, Hannah (Laura Allen) survived the crash while their son, Rex (Dylan Minnette), did not; and the other in which exactly the reverse happened. Each day, Britten goes to sleep in one reality and awakens in the other.

Imagine the relentless pain and stress of having to cope with the grief of losing a loved and the need to move on in one’s own life in not one world, but two. Now imagine the shock that would set in if those two worlds started to overlap, as they begin to for Britten. By the end of its second act, Awake’s pilot episode has effectively immersed viewers in just this mind-bending, heart-rending dilemma.

I knew Jason Isaacs only from his portrayal of Lucius Malfoy in the Harry Potter films. (Another fun factoid: he’s the voice of Lucifel in the video game El Shaddai: Ascension of the Metatron, covered by The Sci-Fi Christian last fall.) Isaacs’ performance as Britten is a marvelous piece of acting. He is capable of far more than the sneers and jeers his turn as Draco’s dad afforded him. He makes viewers feel Britten’s emotional and psychological turmoil in moments both subtle (the way, for example, he briefly shakes as he holds his wife in bed, as though he is repressing a spasm of tears in the nick of time) and dramatic (look no further than the morning after that scene, as Britten awakens without the color-changing wristband he uses to tell the realities apart: Isaacs escalates his character’s panic and terror at just the right tempo). Other cast members turn in fine jobs, as well—most notably Steve Harris as Britten’s police work partner in one reality, and BD Wong as Dr. Lee, the psychiatrist Britten is mandated to see in the same reality (Cherry Jones plays the mandated psychiatrist in the other, Dr. Evans; much of the pilot unfolds as conversations between Britten and these two doctors)—but the show’s success will likely rest on Isaacs’ performance. His work in Awake’s pilot reminds me of Mel Gibson’s in the movie Signs (2002), honoring both the strange, “Twilight Zone”-like nature of the material’s premise and the honest human emotions it creates, feelings to which any viewer can relate. Isaacs’ delivery of the last speech in the pilot offers a perfect example of how he attends to both sides of the equation: Britten tells Dr. Lee, “If the price of having them [i.e., both Hannah and Rex] in my life is my sanity, that’s a price I will happily pay. Now I’ll keep seeing you as long as they make me, but when it comes to letting one of them go, I have no desire to make any progress.”

Britten’s words, and the resolve underlying them, raise, in my mind, the question of whether Awake might not prove to be a parable of the life of faith. I don’t know whether the series plans to address any explicitly religious questions (although it would be fascinating to see it do so), and my guess is series creator Kyle Killen didn’t set out to craft any kind of religious allegory. But Britten’s meetings with his therapists, especially with confrontational Dr. Lee, show he is fully committed to living in both realities. He does not want to prove that one reality is only a dream; he has little patience for attempts to reduce his “mental Mobius strip” (Dr. Lee’s cutting phrase) to psychologically explicable circumstances. 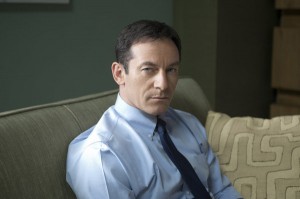 rist call us to live in two worlds, two alternate and even competing realities, at once? The New Testament frequently pictures  faith as a liminal life, a life lived on the threshold between what most people accept as “the real world” and the coming kingdom of God, which Jesus’ life, death, and resurrection demonstrates to be the truth. The apostle Paul writes that “our citizenship is in heaven, and it is from there that we are expecting a Savior” (Phil. 3.20). The letter to the Hebrews praises forebears in faith who “confessed that they were strangers and foreigners on the earth… seeking a homeland” (Heb. 11.13, 14). Yet our conviction that Christ has claimed us for the reality to come, and that we can begin experiencing that reality today, does not allow us to abandon completely the reality in which we now find ourselves. As Jesus prayed to his Father for us, “As you have sent me into the world, so I have sent them into the world” (John 17.18)—the same world that God loved (John 3.16), fallen far from God’s good will though it is.

Like Michael Britten, Christians must be committed to living in two realities at the same time. I wonder if this challenge may even be some part of what Jesus meant when he commanded his disciples to “keep awake” (Matt. 24.42; 25.13; Mark 13.37). We must attend to both sides of a spiritual “Mobius strip,” watching for the ways the world as it is and the new world God will bring overlap and intersect, even if the “Dr. Lees” doubt our sanity. When it comes to letting our faith go, we should have no desire to make any “progress.”

Theologian Paul Tillich described Christian witness with these words: “We want only to show you something we have seen and to tell you something we have heard… that here and there in the world and now and then in ourselves is a New Creation” (quoted by Frederick Buechner, Now and Then, HarperCollins, 1983). In order to see and share that New Creation, we can’t fall asleep. We must stay awake.