To be honest, in the moments after I bought my tickets to John Carter online, I started feeling buyer’s remorse. Did I really want to go see this film? After all, some critics I respect and often agree with—Roger Ebert, for instance, and Entertainment Weekly’s Owen Glieberman—gave the movie less than glowing reviews. And some of Disney’s marketing seemed overly apologetic, especially the one commercial that intones, “Before Star Wars, before Avatar, came the story that inspired them all.” Wasn’t that just another way of saying, “You’ve seen all this before?” My middle school drama teacher taught me never to apologize in advance of a performance. My seminary preaching professors taught me the same lesson regarding sermons: “If, some Sunday, you know you have a dog, at least walk it proudly.” I feared the studio knew it had a big budget bomb on its hand, and was simply trying to steel itself and its audience for some deep disappointment.

Well, the opening weekend’s domestic receipts didn’t budge, let alone break, any records (although the movie is dominating business abroad). The film is, sadly, going up against that family-friendly but excessively commercialized cartoon masquerading as The Lorax. But I say Disney has no reason whatsoever to be ashamed of John Carter. Visually stunning and emotionally stirring, John Carter is a fast-paced and fun adventure that stoked my sense of wonder like no movie has since The Fellowship of the Ring.

“A Genius for the Literalization of the Dream”

Now, that’s not to say John Carter is, in fact, another Lord of the Rings. How could it be? Edgar Rice Burroughs—whose debut novel A Princess of Mars (1912, serialized in All-Story Magazine; 1917, first book edition) is the film’s basis—was not a literary craftsman on the order of Tolkien. He was a pulp writer, paid by the word, needing to produce prose speedily and steadily.

But he did so exceptionally well. Some elite literati dismiss his books as having “enjoyed a remarkable shelf life not so much in libraries or classrooms as in the cluttered, dreamy, overheated minds of teenage boys and certain grown-ups.” (Ouch!) But such genre authorities as The Encyclopedia of Science Fiction (eds. John Clute and Peter Nicholls, St. Martin’s Griffin, 1995) state, more accurately:

It has often been said that Burroughs’ works have small literary or intellectual merit. Nevertheless, because their lack of realistic referents frees them from time, because their efficient narrative style helps to compensate for their prudery and racism, and because Burroughs had a genius for the literalization of the dream, they have endured… Burroughs has probably had more imitators than any other sf writer… [including such “serious sf writers” as] Leigh Brackett, Ray Bradbury, Michael Moorcock… and, above all, Philip José Farmer (p. 178). 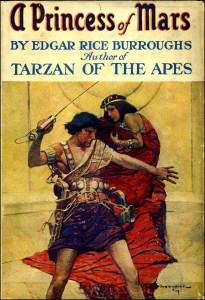 I’ve just started reading A Princess of Mars. If the first half of the first book is any indication, then, it’s true: no fair-minded reader could argue that Burroughs’ Mars books (he eventually wrote nine) exhibit the stylistic eloquence, fully realized characterizations, philological insight, or artistic elegance of Tolkien’s tomes. Yes, both “prudery” and “racism” appear (as, arguably, they do in Tolkien’s works, as well). Nevertheless, Barsoom (what Burroughs’ Martians call their planet) is a richly realized “sub-creation”—Tolkien’s term, explains John Timmerman, for “an alluring secondary world which we believe in so long as we are in it”—not altogether unworthy of comparison with Middle-earth. Barsoom, too, boasts fantastic vistas and awe-inspiring cities populated by a variety of exotic creatures and fascinating peoples, each with their own language and lore, clashing in epic battles to decide the fate of worlds.

That’s the dream Burroughs “literalizes.” Sometimes he does so awkwardly; the first several chapters of A Princess of Mars lack any dialogue and consist largely of “info dumps.” On the other hand, Burroughs’ style evokes 18th– and 19th-century travel narratives. Instead of taking readers to Arabia or China, Burroughs takes us to Mars: not a scientifically plausible Mars, but no more or less laughable than H.G. Wells’ tripod-riding invaders or Ray Bradbury’s nostalgia-soaked rendering of the Red Planet. Barsoom is more fantasy than science fiction, but however you classify it, it’s a whole lot of fun.

The John Carter creative team brilliantly brings Barsoom to the silver screen. The movie has many specific positives—among them, a surprisingly literate screenplay written, in part, by Michael Chabon (of The Amazing Adventures of Kavalier & Clay and The Astonishing Secret of Awesome Man), complete with several well-placed biblical allusions; a rich motion-capture performance from Willem Defoe; and a driving, dramatic score by Michael Giacchino that echoes and excels his music for Star Trek (2009)—and, it must be said, a few noticeable faults. A handful of flashbacks giving glimpses of Carter’s pre-Barsoom backstory, for example—in themselves, well-placed and finely executed—fall a little emotionally flat because they are so brief. 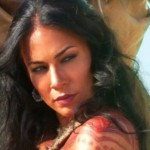 I do appreciate the creative team’s efforts to make Dejah Thoris, titular princess of Burroughs’ first book, something more than a damsel in distress (Lynn Collins’ Dejah is an accomplished scientist and independent spirit). Apparently, long-time fans of Burroughs’ books know that she is much more, and Collins’ portrayal has been winning some of their affections. Her Dejah Thoris does her fair share of fighting, and her romance with Carter seems a match of equals. Still, even though she is more modestly clothed than in such cheesecake (if not, indeed, soft porn) depictions of her by Frank Frazetta or in the Dynamite ongoing Dejah Thoris comic book, moments occur that undercut this more modern approach to the character. Having Dejah comment that the wedding dress foisted upon her by an unwanted suitor is “a bit garish for [her] tastes” doesn’t negate its revealing nature any more than the fact that Princess Leia wears her (in)famous “metal bikini” against her will in Return of the Jedi makes it a modest get-up; and one overhead view of Dejah in the wedding procession seems unnecessary except to indulge the male gaze. 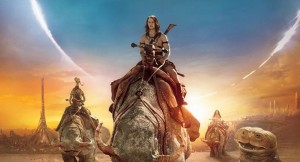 The movie as a whole, however, makes Barsoom the star. From the incredibly detailed, mechanical marching cities, to the several stark but serene landscapes (I forgot quite quickly that I was looking at a digitally altered Utah), to the roaring waters of the mighty river Iss, Barsoom simply looks real—as do its non-human inhabitants. The Tharks are towering, slender, green-skinned, four-armed bipeds, all taken straight from Burroughs’ description of them. But the care taken in animating their faces really “sells” them. Unlike many CGI characters, the Tharks seem substantial, both physically and, in the case of the three main Tharks, as distinct personalities. And Woola, the super-massive but super-speedy Martian “dog,” is a faithful companion who tugs at the heartstrings in the best Disney tradition. It’s been a while since I was disappointed when a movie ended, but I was honestly not ready for John Carter’s credits to roll. Like our hero himself, I felt as though I’d been at home.

That may be because, as that commercial I mentioned acknowledges, much about the story, its setting, and its characters seem familiar (but only because Burroughs proved so influential). But it may also be because John Carter speaks to that yearning we all have for home: not simply the place we’re from, but the place where we are who we were meant to be. Carter is a former Confederate soldier who, in the aftermath of the Civil War, finds himself without a country and without a cause; but on Barsoom, he finds what he lacks. It’s no accident, I think, that he lands on Mars in a nursery full of Thark hatchlings, or that his victory over a White Ape in the Tharks’ arena resembles a bloody birth. On Barsoom, John Carter is born again. The mechanism by which he arrives on Barsoom, left unexplained by Burroughs, receives a nifty justification by quantum physics in the film, but the real reason he goes to Barsoom is because Barsoom is where he was supposed to be all along. He is, as he eventually calls himself, “John Carter of Mars.” 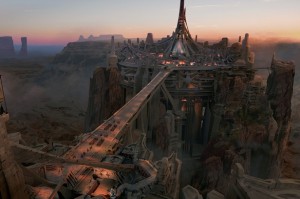 The Letter to the Hebrews tells us of forebears in faith who “confessed that they were strangers and foreigners on the earth… seeking a homeland… a better country, that is, a heavenly one” (Heb. 11.13-16). By taking its hero to his “heavenly” home, John Carter reminded me that we are all looking for our heavenly home. And as wonderful as Barsoom is, the city the God who is unashamed of us has prepared will be more so (Heb. 11.16). The good news is we can experience something of that fantastic homecoming today through Jesus Christ. We “have died, and [our] life is hidden with Christ in God” (Col. 3.3). Through him, even now, we begin to become who were meant to be. In him, even now, we find ourselves where we were supposed to be all along.

Related Articles at The Sci-Fi Christian: