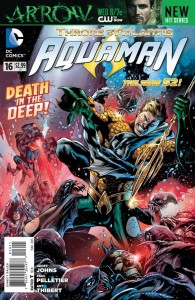 It is safe to say that The Sci-Fi Christian established Aquaman as the greatest superhero ever in the first “Superhero Spotlight”!  Seriously, in DC’s New 52 new life is being brought to the character in exciting ways.  With solid writing supporting the title, Aquaman is a key title in the New 52.  With a storyline that has been crossing over with Justice League, now is the perfect time for Mike and Dan to dissect the Sea King in Aquaman #16 which is also part 4 of the Throne of Atlantis.

Do you feel this story represents Aquaman well?

Mike:  Absolutely not. In fact, I’m more convinced than ever that Aquaman is the lamest superhero ever.

Actually, I’m just kidding. I was somewhat surprised, however, at how little “screen time” our title hero actually occupies in Aquaman #16. I understand this is the fourth chapter of a longer story, and I’m jumping in in medias res. But much of the issue—and, frankly, its more interesting pages—are focused on either other superheroes (the subplot involving Cyborg, who seems to be lamenting the loss of his non-technologically enhanced life, was especially compelling) or [NAME RETRACTED], whom I gather is a long-running Aquaman supporting cast member (and whose part in the plot, I gather, is causing long-time Aquaman fans some consternation!).

When he’s around, Aquaman is—well, he’s fine. He’s all right. He’s doing the things I think of Aquaman as doing, mostly a lot of swimming and telepathic communication with ocean life. He’s obviously strong, and a natural leader. But he seems more reactive than pro-active (though I suspect I only think that because I am reading one issue out of context), and for a few pages he plays second fiddle to The-Always-Awesome-Even-Not-In-His-Own-Book Batman (how tiresome). At least Aquaman and Mera get a nice, spotlight moment near the end in which they rescue Superman and Wonder Woman. I trust that, as a whole, Throne of Atlantis is a suitable showcase for the DCU’s aquatic King Arthur.

Dan:  What lamest, I just got really sick for a few minutes!

I really think that this title is one of the real victories of the New 52 is the manner Aquaman has been treated.  Here he continues to be a key hero in the DC Universe, especially since he will likely be the key in ending a war between Atlantis and the surface world.  He is treated seriously, almost on par with DC’s superstar Batman, which is the type of Aquaman story I like best, unless it’s as part of Batman Brave and the Bold!

Mike:  In addition to the subplot about Cyborg, I liked the mid-issue battle led by Hawkman the best. It was not only full of bright color and fast-paced movement, but also had an unexpected but welcome touch of humor when Element Woman gushes to Black Lightning how exciting she finds the fracas. The fight scene also seems to get close to one of the story’s thematic nerves, at least to my uninitiated eye (more on that in a bit). Are these pages helping to set up the upcoming, new JLA ongoing book, I wonder?

Dan:  Now Mike claims that Aquaman has to play second fiddle to the great and powerful Batman in this issue.  But see things a little different.  I secretly enjoy that Batman is somewhat helpless for this entire story.  Now, that does not mean he is not helpful, because he is.  In fact he is more helpful to Aquaman for much of the story than Superman and Wonder Woman, who could have guessed.  But Batman is completely dependent on Aquaman to survive this adventure.  If he survived!

In general I really enjoy this story, story arc and artwork.  It’s the first “Issue of the Day” we have examined where I did not find myself with major complaints about.

Dan:  What I like the least is I opened the book and Cyborg was there and this is an Aquaman book!  Okay, let me explain.  I read Aquaman #15 and jumped straight into issue #16.  So I completely missed Justice League #16, which I assume both resolved the ending of Aquaman #15 and placed Cyborg into the story in the spot we find him in this issue.  Cyborg was not even in Aquaman #15, so I was pretty confused for a few pages.  I have ordered the Justice League issues I missed in this storyline so I can get the full scope of the story.  Since I was somewhat prepared for the action in issued #16, I would look to Mike to describe the feeling when jumping completely into the middle of this story.  But despite being the middle of a story I do believe this issue can stand alone with an interesting story with the Trench largely resolved.

Mike:  Again, I didn’t like the relative lack of attention to Aquaman. If it didn’t have his name and picture on the cover, I would think this issue was part of a larger Justice League adventure (as opposed, for instance, to the current “H’El on Earth” crossover event in the Superman titles: each chapter focuses squarely on either Superman, Superboy, or Supergirl).

Cyborg? Who’s book is this?

Do you feel this story conforms to canon?

Mike:  I have no idea. Given that The New 52 isn’t that old, I certainly hope so. If it doesn’t, then DC has bigger fish than Aquaman to fry. (Thank you, thank you, I’m here all week.)

Dan:  Yes and no.  I recognize that this is part of DC’s New 52, so canon is somewhat out of the window.  But for fans of pre-52 Aquaman stories there is plenty to enjoy with the orange costume, Mera, Vulko, and Ocean Master as a key villain.  The Throne of Atlantis is introducing key Aquafamily characters to the New 52 with new canon.  This issue and storyline builds on the New 52 canon with the return of the Trench, no matter how weak of a villain Matt Anderson believes they are!

So for me, this story is reintroducing Aquaman canon, reshaping classic canon and building new canon.

Mike:  Not without some major reaches, but I’d be willing to bet sand dollars that there are some to be found in Throne of Atlantis as a whole. As far as I can tell, it’s a story that revolves around sibling rivalry, which is a recurring theme in the book of Genesis. At least Esau, say, never set off a missile attack that threatened to wipe Boston off the face of the map, as Orm has done here! Aquaman at one point laments, “It was a mistake to try to talk to my brother.” If true, that’s really a shame, since the possibility of reconciliation is one for which the Bible always holds out hope. My favorite part of the Jacob and Esau story, in fact, is when Esau meets his returning brother, who swindled him out of both his birthright and their father’s blessing, by embracing him. Clearly moved, Jacob tells Esau, “[T]ruly, to see your face is like seeing the face of God” (Gen. 33.10, NRSV). When we forgive others, our face can reflect God’s face to them; when we receive forgiveness, we can see God in the face of our forgiver.

During the fight with the Justice League backups, Orm hints at what I take as another of the storyline’s overarching thematic concerns. He states his goal as retribution, “retribution for all those tortured, poisoned and murdered over the centuries by the surface dwellers.” Throne of Atlantis seems to have something to say about whether we human beings have or haven’t fulfilled our God-given mission of exercising dominion—not domination—over the earth, including its oceans and the creatures who live in them. I can only assume Aquaman and the other heroes will save Boston and the day, when all is said and done; but will a reprieve from Orm’s revenge plot lead to surface dwellers’ repentance for abusing this world’s waters?

Dan:  I wanted to find something other than the reoccurring theme of in the world but not of it found throughout Aquaman and instead note the power of forgiveness.  When I put down Aquaman #14, the Justice League and Aquaman were of opposing opinions of how to address the attack by Atlantis.  I mean violently, there will be blood, opposed.  In this story the majority of Aquaman’s decisions are based around how to protect and free Batman, Superman and Wonder Woman (saving not being second banana).  In his actions there is little sign of resentment.  It is as if he has truly forgiven his colleagues, especially Batman, for standing against his choices.  There is a moment where Aquaman and Batman basically say I’m sorry.  And it’s clear that this moment frees each from the baggage of their choices to stand apart instead of together an issue earlier.

Mike:  No, but I’m sufficiently satisfied that, if I ever have the chance to read Throne of Atlantis in trade form for cheap or for free, I will do so.

Dan:  I am definitely more excited about Aquaman.  The twist at the end of this issue immediately leads me to ask me what will happen next.  The ending fundamentally changes a character that has been around the DC universe since the 1960’s.  In many ways for me this is refreshing that they have taken this risk in the New 52 reboot.

So, I have already ordered the issues of Justice League that I missed that contain half of this story arc.  And I have started to look back and order back issues of Aquaman that are not part of my meager collection.  I have been considering finding a title that I read on a monthly basis, and Aquaman has won.  As long as Geoff Johns is writing the sea sleuth, I am probably going to pick up the title.  So enthusiastically yes!

Overall, Aquaman 16 appears to have a strong story while it may not have enough Aquaman for some readers.  The Throne of Atlantis storyline seems to have caught the interest of both Mike and Dan to different levels, one showing willingness to read the collected story and one jumping onboard to the monthly title.  Based on past “Issues of the Day”, DC should consider this a success.

Are you swimming into Aquaman?