“Secrets protect us,” the Doctor insists to Clara in this episode. “Secrets keep us safe.” I don’t think this maxim always applies in real life, but scripter Steve Thompson and showrunner Steven Moffat should have heeded it before planning and producing Doctor Who’s latest episode.

Despite some determined Googling, I can’t locate a certain interview I read around the time Moffat took the Doctor Who reins. I recall him making the point that the TARDIS is best understood as a device for getting characters quickly into an interesting story on the other side of its doors. I did turn up one quote to that effect, even though it’s not the quote I remember: Moffat told Under the Radar’s Mark Redfern in 2008, “Doctor Who is essentially about the Doctor walking out of the TARDIS’ doors and finding completely new stuff he doesn’t understand yet. That’s the paradigm Doctor Who story.”

If you happen to know the interview I’m thinking of, please steer me toward it. I’d like to make Moffat read it now. This week’s episode bolsters the argument that the best Doctor Who stories don’t take place inside the Doctor’s wonderful blue box.

And I do think the TARDIS is wonderful. Creative writing and convincing acting in the face of the BBC’s 1963 budgetary constraints yielded an enduring sci-fi icon. Even when I wasn’t a Who fan, I recognized the TARDIS as surely as I did the Millennium Falcon or the starship Enterprise. Now that I am a fan, I appreciate this bigger-on-the-inside (or “smaller on the outside”) imaginary achievement even more. I smile whenever I hear those groaning engines. I may have teared up (ahem) when that “something blue” materialized on the dance floor at Amy and Rory’s wedding in “The Big Bang.” And, of course, I can no longer think about the TARDIS apart from Neil Gaiman’s bizarre but beautiful episode, “The Doctor’s Wife.”

But even Gaiman’s script—which gave us the TARDIS temporarily made flesh, for heaven’s sake—exercised restraint instead of yielding to the temptation to take viewers on a bona fide TARDIS tour. Yes, we saw Amy and Rory running through a few of its corridors, but Gaiman (and, at the time, Moffat too) understood that no small part of the TARDIS’ appeal is that viewers furnish its fantastic interior for themselves.

A friend with whom I regularly watch Who has decided that the show is “a radio play for the eyes.” In his opinion, Who works best when it simply suggests something startling and surprising and then, like audio dramas of yesteryear, trusts the audience to fill in the rest. I don’t completely agree with his assessment, but I appreciate its wisdom.

I enjoyed the glimpses we got of the TARDIS’ observatory and storied swimming pool. I liked the small touches that harkened back to Who history both recent and not-so: the Doctor’s “cot,” the umbrella (no question mark-shaped handle, but surely a tip o’ the bumbershoot to Sylvester McCoy), and especially the snatches of dialogue from Susan, Ian, the Ninth Doctor, and Amy. I’ll even admit I liked the Doctor’s Jorge Luis Borges-worthy library. As a bibliophile who works with rare volumes, how could I not? I don’t know whether the bottled Encyclopedia Gallifrey hails from classic Who, but it’s an eccentric and enchanting detail.

As the episode wore on, however, dragging us ever deeper into the TARDIS, both the plot and my patience with it fell apart. Hearing that the TARDIS is powered by a perpetually exploding star on the verge of becoming a black hole, for example, could have been quite exciting; looking at it was not. Speculating about what the mysterious engine room of this marvelous, living machine must be like allows space for mystery and wonder; seeing the Doctor and Clara move through mechanical debris suspended against a sterile, white background crowded those reactions out. And while I know that Thompson’s script offered some attempt at an explanation as to why our heroes found themselves in a holodeck-like environment at one point, even after two viewings, I couldn’t tell you what that explanation was.

“Journey to the Centre of the TARDIS” falls flat, in part, for the same reason Steven Spielberg’s 1980 revision of Close Encounters of the Third Kind doesn’t quite work: no creative team can show an audience an alien ship’s interior that will be as incredibly, outrageously out-of-this world as the one it’s seeing in its imagination. After this episode, the TARDIS seems less real to me, not more. Keeping its secrets would have kept that illusion safe. 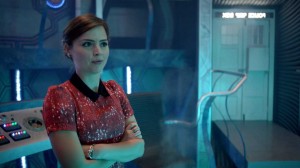 I still feel sorry for Jenna-Louise Coleman. As a regular cast member she is stuck playing a character who is far less interesting than either of her previous roles on the show. The Doctor tells the Van Baalen brothers Clara is “the salvage of a lifetime” (a phrase which raises all kinds of red flags about how the Doctor views her relationship to her), and their hand-held sensors register her “sass,” but all we see for ourselves is, once more, a pretty face for the Doctor to rescue. (Well, in her burning-alive future state, not so pretty, but you know what I mean.) In previous weeks, Clara has shown a few moments of true agency, but here, her contribution is a completely passive one. She isn’t even allowed to read the message seared into her palm once it’s completely legible.

Since this episode fails Clara on the characterization front, does it at least advance the ongoing mystery of her identity? No. Instead, it retreads the movement seen in “The Rings of Akhaten” and “Hide”: the Doctor obsesses over Clara’s secret, is rebuked for it, and accepts (though not really) that she is simply herself. Coleman convincingly plays Clara’s bewilderment at the Doctor’s angry explosion (“What are you? A test, a trap?”), but the Big Friendly Reset Button at the episode’s end ensures that this emotionally strong moment she and the Doctor share will have no repercussions for Clara going forward.

Unless, of course, it will. As Gregor Van Baalen’s experience demonstrates (more on that in a moment), some chance remains that this episode’s events will stick with Clara to some degree. She may remember that the Doctor has seen her die twice, and that memory may finally push her into some engrossing character development. Would she continue to feel completely safe around someone in whose company she has already twice perished? 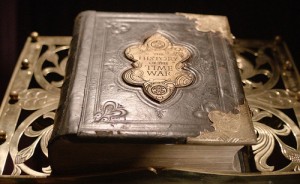 The most interesting “Clara moment” this week is, of course, not really about Clara at all, but about the Doctor. (Oh, well—it is his show, after all.) In one corner of that huge, leather-bound, clasp-fitted tome chronicling the Time War, Clara sees the Doctor’s name. “So that’s who,” she says, suggesting that his name holds some inherent significance for her. Is it a name we, too, would recognize if we saw it? Or is Clara’s understanding contingent upon her experiences to this point, in any of her various incarnations? Will her memory of knowing the Doctor’s name remain, despite the Big Friendly Reset Button? Will she recover it on her own—or (as I suspect) will it be forced from her on the fields of Trenzalore, “at the fall of the eleventh, when no living creature can speak falsely or fail to answer”?

A final thought: I can’t shake the feeling that this episode began its life as being far more about the Van Baalen brothers than about either Clara or the Doctor. Ashley Walters as Gregor, Mark Oliver as Bram, and Jahvel Hall as Tricky deliver strong performances, leaving me wanting to know more about these characters’ past and future. Envy and rivalry are common enough among siblings, but the dynamics at work that allowed Gregor and Bram to convince Tricky that he wasn’t even human indicate some serious family conflict, familial strife that would rival any of the feuds found in the pages of Genesis, from Cain and Abel through Jacob and Esau to Joseph and his brothers. Joseph’s brothers sold their little brother into slavery, but Gregor and Bram steal Tricky’s very identity! That’s harsh.

UPDATE: I neglected to mention (after I went and promised I would) that I was pleased by the fact that, even though Gregor does not remember his time aboard the TARDIS, the experience has changed him. His assertion in the penultimate scene that he still has some shred of decency struck me as a lovely character moment (and, of course, suggests that Clara may experience a similar lasting affect from this week’s adventure, remembering, not that she has a shred of decency–she has already shown she has much more decency than that–but that she has learned the Doctor’s name).

“I just want a brother beside me!” Tricky laments at one point. I think everyone’s cried that lament, at some point. When we’re scared, in pain, lost, grieving, confused, alone—we want someone beside us, someone like us but also, perhaps, bigger, stronger, more capable; someone like a big brother in whom we can place our trust, someone who can promise us that we will be all right, even if we currently aren’t. No human brother can completely fill that bill, not all the time, but “Jesus is not ashamed to call [us] brothers and sisters” (Hebrews 2.11). Our “big brother” doesn’t give us false identities, but restores to us our true ones, declaring, “Here am I and the children whom God has given me” (2.13).

What did you think of “Journey to the Centre of the TARDIS”?