At last! Series 7B finally delivered an episode that left me excited, enthusiastic about Doctor Who, and eager for more. 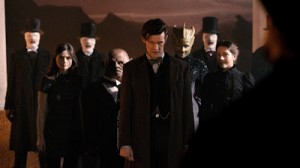 From its riveting, retcon-riddled teaser (even a Who fan-come-lately like me got a kick out of Clara’s race through multiple past Doctors’ adventures), to another trio of fantastic performances from the Paternoster Gang, to the somewhat nebulous but no doubt nefarious Whisper Men, to that stunner of a stinger with John Hurt, this season finale showed that Steven Moffat hasn’t forgotten how to spin a compelling, character-driven, and consequential story.

“The Name of the Doctor” isn’t, of course, the tale of Trenzalore that Moffat teased at the close of series six. These events take place in the wreckage-strewn aftermath of “the fall of the eleventh,” and don’t themselves chronicle that day of doom “when no living creature can speak falsely or fail to answer.”  I wonder if Moffat will ever relate the Doktor-Dämmerung that unfolded on this post-apocalyptic planet of graves, either during November’s fiftieth anniversary special or whenever Matt Smith’s tenure ends. Maybe we’ll be left to imagine for ourselves the catastrophic circumstances in which “the first question” was answered. But while this episode wasn’t the one I was expecting, Moffat so deftly rendered my expectations moot, I find I don’t mind.

Not that the episode was perfect. 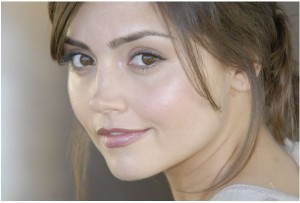 Take the resolution of Clara’s “impossible” identity. On the one hand, Clara’s decision to throw herself into the Doctor’s personal time stream is a beautiful image of agape. Is it too irreverent to suggest that, had he been a Whovian, the apostle Paul might have written, “Though I give my very self to be torn by the time winds into a million echoes, scattered like confetti across time and space, but have not love, I gain nothing” (cf. 1 Cor. 13.3)? Well, maybe. But Clara does demonstrate that greatest love of which Jesus spoke and which he lived out (John 15.13). River warns Clara, “The real you will die.” She was willing to sacrifice her future lives for the Doctor in “Let’s Kill Hitler,” but Clara is willing to sacrifice her present one.

Christians rightly value self-sacrifice, but we must also attend to how the call to “look not to your own interests, but to the interests of others” (Phil. 2.4) has been misheard and misused. As I wrote in response to “The Rings of Akhaten,” “Too often, in art as in life, women are expected to be always the ones who give, without complaint, even if ‘for the greater good.’ I don’t want to see too many Clara stories in which she conforms to that stereotype.”

“The Name of the Doctor,” however, is the ultimate story of such conforming. “I was born to save the Doctor,” says Clara (several times). Ponder that. At the culmination of her character arc, Clara defines her very existence exclusively in terms of her relationship to the Doctor. She is, as the Doctor calls her in their tearful embrace at episode’s end, “My Clara”—and little more. (Okay, so she’s also soufflé girl. I guess even an impossible girl’s place is the kitchen.)

Some may see Clara’s endless marathon through time and space as a kind of bodhisattva-like blessedness. I see it as more than evocative of the old lie that women can be defined only in terms of their relationship to men.

Yes, God made men and women for each other, to live together as the image of God (see Gen. 2.18, 23; 1.27); on the “macro” level, we might say women cannot be defined without regard to men—and vice versa! But on the “micro” level of everyday human relationships, no one, female or male, should completely submerge their sense of self in any other person. It is only in our Creator that we “live and move and have our being” (Acts 17.28), and “our life is hidden in Christ with God” (Col. 3.3). 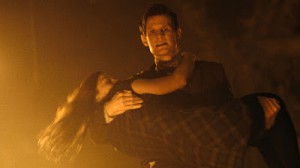 I suppose Clara may be talking in romantic hyperbole, as a starry-eyed young lover tells her or his beloved, “I was born to be with you.” That’s not meant to be taken as an existential theorem. And I think the Doctor’s dangerous and difficult entrance into his own time stream to save Clara—“just this once, for the hell of it”—refutes, to some extent, my reading of Clara’s arc. In that act, the Doctor demonstrates the mutual love to which Christ calls us (e.g., John 13.34; Rom. 12.10; Eph. 5.21). The Doctor does give Clara her life back, restoring to her “the most important leaf in the history of the universe.”

Has the Doctor reached the point I thought he needed to reach in “Hide”? Is he now vulnerable enough and open enough to pain to “hold hands and not let go”? Has he decided, really and truly, that “every lonely monster needs a companion”? Given five decades of Doctor Who format, I’d say the odds are against it—but who knows?

In Part 2, we’ll brave a visit to the Doctor’s grave for reflections on mortality, mission, and identity.