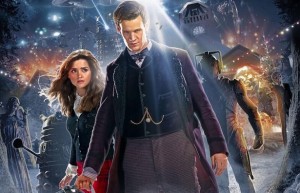 It’s no more rational to think Moffat had already mapped out this year’s Christmas special when he introduced the prophecy about Trenzalore two years ago than it is to think Saint Nick slides down chimneys to fill stockings and fill up on milk and cookies. (Should’ve put Jammie Dodgers on the hearth!) But “The Time of the Doctor” left me as wide-eyed with wonder as a little kid listening for reindeer hooves on the roof. Moffat wrapped up so many of the loose ends of Matt Smith’s tenure with bright, shiny ribbons of clever continuity, character-driven humor, entertaining action, and genuine emotional warmth. It’s a gift long on both style and substance, one that should land Moffat on Doctor Who fans’ “nice list” for some time.

When the Doctor and Clara rounded a corner in the clock tower to see none other than the crack in time and space from Amelia Pond’s wall, my jaw fell open as wide as a nutcracker’s. I was thrilled Trenzalore’s secrets linked up so many elements from the last three years. The Silence, the Church Militant, the Dalek decoys—Moffat had them all clicking into place. Before Christmas, I’d had no real desire to rewatch series six or seven; now, I can’t wait. Again, I don’t really think all those episodes will hang together perfectly, but master illusionist Moffat has given my imagination all it needs to make them seem they do. He realizes that, as much as fans clamor for definitive explanations and authoritative interpretations, we can’t resist the chance to fill in gaps for ourselves. He’s implicitly enlisting us as co-creators, as good storytellers do. (Yes, you’re welcome to remind me of this charitable, Christmastide attitude the next time I say, in response to future episodes, “That makes no sense!”)

Kudos to the Cast

Matt Smith departed Doctor Who in fine form, turning in one of his strongest performances. He leaves no doubt he’s mastered the many moods of the Doctor, from absurd naïveté (suggesting he project his clothes onto the Oswalds’ visual cortices “to break the ice”) and joyous, childlike abandon (the sequence in which he teaches the children of Christmas to dance “the drunk giraffe” is so endearing—“‘Cool’ is not cool!”), to unbridled anger (I wasn’t expecting him to roar at Clara so when she returned with the TARDIS) and philosophical pensiveness (“I’ve been having that argument for the last three hundred years, all by myself”).

I honestly don’t want to ever have a “favorite Doctor”—with twelve (soon thirteen) to choose from already, why should I limit myself?—but Smith will always be “my Doctor,” not only because he was the first I watched but also because he holds such a wide range of equally compelling opposites in creative tension. Watch again his last conversation with Clara as the aged Doctor, before he climbs the tower to confront the Daleks. See how he effortlessly shifts that elastic face of his from eager anticipation of the poem in the Christmas cracker to exasperated dismissal of it. We’re watching a finally dispirited Don Quixote, who’s still unable to resist tilting at windmills even though he believes he’ll fail. Smith’s delivery of the line about his lack of a plan—he’ll just “talk very fast [and] hope something good happens”—is humorous and heartbreaking at once. Moffat and others consistently gave the Eleventh Doctor marvelous words; Smith could always, even in lesser episodes, be counted on to bring them to brilliant life.

Jenna Coleman continues to impress as Clara. As in “The Day of the Doctor,” now that her character is free to be more than a mystery, she shows that Clara is, yes, still largely defined in relationship to the Doctor, but also intelligent, compassionate, and bold. Clinging to the TARDIS as it vanishes back into the Time Vortex? Gutsy. Even bolder is her defiance of the Daleks: “I’m not afraid. I’ll leave that to you.” Outstanding! I can see why the Doctor fell for her (and I think he did, even if she did fall harder for him). Given that Clara is also, by her own (albeit unwilling) admission, a “bubbly personality masking [a] bossy control freak” (perhaps her funniest moment to date), how well she does or doesn’t become accustomed to the Doctor’s new face should prove fascinating. We have not watched a companion (or perhaps the term will now be “associate?”) bridge regenerations since Rose watched the Ninth Doctor become the Tenth in 2005, so the situation should bring a welcome new dynamic to the show. 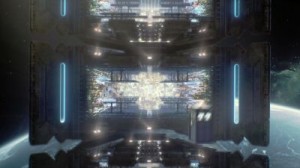 The Church of the Papal Mainframe has been a recurring feature of the Eleventh Doctor’s run, first introduced in “The Time of Angels” as “the Church Militant.” In this episode, it’s weirder than ever, with not only machine-gun toting clerics but also altars that look like beds (or beds that look like altars), genetically engineered Silent confessional priests, a nudist non-dress code, and the libidinous Mother Superious Tasha Lem, whom Clara sums up as a “psycho space nun.”

Is the Church of the Papal Mainframe meant to parody the Christian church? If so, why has Moffat put us in his satirical sights?

We have only a few hints about this future Church’s attitudes toward sexuality, but Tasha’s come-hither comment about the altar-bed suggests a fuller acceptance of embodied human existence than the real church often demonstrates. For a faith that professes God became incarnate (John 1.14), Christianity has often failed to affirm the value of life in the flesh. And while physical life encompasses more than sexuality, the church in some quarters has been and often still is reluctant to reflect on how to be sexual before God: despite Scripture’s teaching that God “created humankind in his image… male and female” (Gen. 1.27); despite the presence of the Song of Solomon in our scriptural canon (some of it might make even Tasha blush); despite the apostolic comparison of Christ’s union with the church to the physical union of marriage (Eph. 5.29-32). Perhaps the Church of the Papal Mainframe overreacts by placing a bed at the center of its sacramental life, but it can’t be accused of ignoring human sexuality, much less making it a source of guilt and shame.

Neither has this Church ignored human beings’ need for safety, keeping people safe “in this world and the next.” Is this aspect of the Church a jab at some Christian traditions’ tendency to focus on the hereafter at the expense of the here and now? Such temptation is not new; the apostle James warned against it: “If a brother or sister is naked and lacks daily food, and one of you says to them, ‘Go in peace; keep warm and eat your fill,’ and yet you do not supply their bodily needs, what is the good of that?” (James 2.15-16). The church has sometimes contented itself with preaching hope for the world to come without translating that hope into action that gives people hope for the world in which they already find themselves. 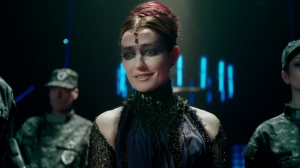 Apparently, the Church of the Papal Mainframe knows no such division between spiritual and temporal safety. This Church arrived first at Trenzalore, shielding that planet to bring about and enforce peace. Many of our churches could learn a lesson here about being proactive, rather than reactive; about working first for peace and safety, rather than only and always responding to their lack. Evangelist and author Tony Campolo says: “The Good Samaritan did the right thing when he picked up the bandits’ victim, but if every day two or three people get mugged on the road between Jerusalem and Jericho, there comes a point at which we must realize that being Good Samaritans is not enough” (Campolo, Let Me Tell You a Story; 2000: Thomas Nelson, p. 116).

On the other hand, the church has, at some times in its history, acted as though God ordained it to be the guarantor of worldly security, with all the trappings of power and prestige that role can bring. “You know,” Jesus cautioned his disciples, “that among the Gentiles those whom they recognize as their rulers lord it over them, and their great ones are tyrants over them. But it is not so among you…” (Mark 10.42-43). When the church becomes indistinguishable from the “Gentile” powers that be, it loses sight of the identity God gave it: to be (as my denomination has phrased it) “the provisional demonstration of what God intends for all of humanity,” a community marked by mutual love, service to neighbors, and obedience to God. The church must live as that community trusting in God alone, “even at the risk of losing its life” (Presbyterian Church (U.S.A.), Book of Order, F-1.0301).

I don’t see any evidence that the Church of the Papal Mainframe trusts in any strength or power beyond its own. As “the security hub of the known universe,” it has forgotten that only God is “our refuge and strength, a very present help in trouble” (Ps. 46.1). Mortal might can do much, and should be used for good when possible, but cannot provide ultimate security.

I wonder if this Church ever knew that lesson. It might have. Perhaps that insight helped spark its abandonment of clothing! After all, God clothed Adam and Eve lovingly, but also as a concession to human sin (Gen. 3.21). Prior to the Fall, we trusted in God alone, a whole-hearted trust reflected in being naked and unashamed (Gen. 2.25). Even now, when we approach God in prayer, our neighbors in service, and our fellow believers in community, we are called, not to cover and mask ourselves, but to be truly present, open and vulnerable. In a non-literal but real sense, the Doctor is right: we can’t go to church, we can’t be the church, with our “clothes” on! We must instead clothe ourselves with love (Col. 3.14).

Tomorrow, in Part 2, take a look at the Eleventh Doctor’s regenerations–both of them!–and their ramifcations.