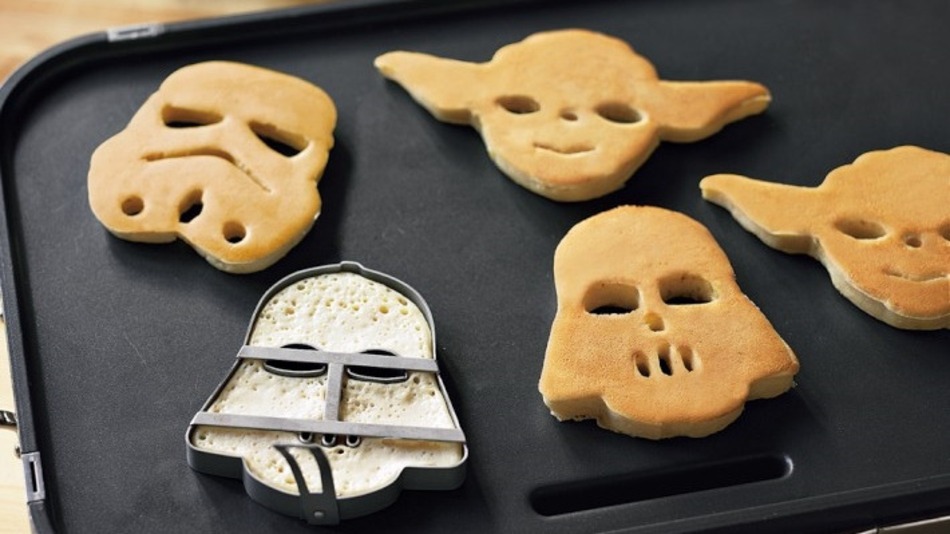 On the historic Christian calendar, today is Shrove Tuesday. The word “shrive” means “confess,” and so Shrove Tuesday is supposed to be an especially appropriate day for Christians to examine themselves and confess their sins, in preparation for the penitential season of Lent which begins tomorrow, Ash Wednesday.

In popular culture, however, Shrove Tuesday is “Fat Tuesdasy,” or Mardi Gras—a day for (as they say in “Nawlins”) letting the good times roll. Laissez le bon temps rouler! It’s ostensibly one last gasp of fun and frivolity before Lent. And while there’s much Mardi Gras excess I wouldn’t recommend Christians take part in, I do like the pancake dinners many congregations host. They’re opportunities for enjoyable Christian fellowship, and they’re a symbolic and tasty reminder that it’s time to give up the fatty stuff from our physical and spiritual diets, and train ourselves in godliness instead. (I have yet to see a church serve those Star Wars pancakes, though. They are trickier to cook than one might think.)

(Of course, the congregation I attend always schedules its annual dessert-making competition for the first Sunday of March, which invariably falls soon after Ash Wednesday, so…!)

Yesterday, over at his always excellent blog The Christian Nerd, the Rev. Scott Higa posted a fun reflection on “Nerdy Deserts.” When I first read his post’s title, however, and with Fat Tuesday just around the corner, I thought he was going to talk about “Nerdy Desserts!” I’ll take a dessert over a desert, even a nerdy one, any day.

My misreading of Scott’s title, so close to the start of the Church’s forty-day fast, made me wonder: What are some “nerdy desserts” that some favorite ci-fi and fantasy characters might choose to give up for Lent? 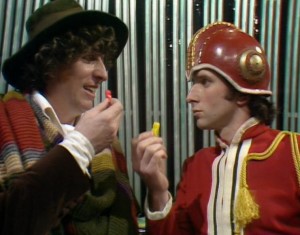 We know Time Lords have two hearts. Do they also have two sweet teeth? Throughout his “incarnations,” the Doctor has enjoyed several sugary treats (who can forget the Eleventh Doctor holding the Daleks at bay with a Jammie Dodger?), but Jelly Babies are apparently his favorite fun food. The Second Doctor ate a few, but the Fourth Doctor truly indulged his love of the gummy goodies, offering them on multiple occasions to friend and foe alike. Since Tom Baker’s tenure, we’ve also seen the Eighth and Twelfth Doctors enjoy the snack (in the 1996 TV movie and “Mummy on the Orient Express,” respectively).  I suspect, however, the Doctor could give them up for Lent without too much trouble. At two thousand years old and counting, forty days probably doesn’t seem too long. 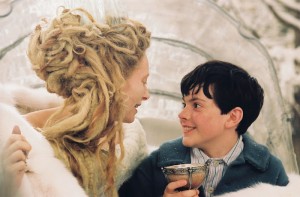 For years, Turkish Delight only existed for me within the pages of The Lion, the Witch, and the Wardrobe as the confection with which the self-styled “Queen of Narnia” successfully tempts Edmund into betraying his siblings. I never tasted the candies myself until I was an adult. I don’t find the stuff too tempting. (Now, a big bowl of extra rich premium ice cream, on the other hand…!) The Witch’s enchanted Turkish Delight represents the dangers of self-indulgence: The more Edmund eats, the more he wants. It is only “food that perishes,” not “food that endures for eternal life” (John 6.27, NRSV), the food we receive by following Jesus in choosing the Father’s will over our own.

In “Phantasms,” from Star Trek: The Next Generation’s seventh season, Data dreams about cutting into Counselor Troi as though she were a layer cake. It’s got to be one of the creepiest desserts in science fiction. (Watching Dr. Crusher drink from Will Riker’s skull through a straw is also none too appetizing.) As it turns out, Data’s dream is his way of subconsciously detecting interphasic organisms. Being an android, Data doesn’t require food. What, I wonder, would he abstain from for Lent were he observing the season? Could he set up a subroutine to circumvent any possible lapses in will power? That would be cheating; we are supposed to rely on the Holy Spirit to strengthen us!

Cellular peptide cake became quite the in-joke in my family for a while. When my wife and I were married, her mother, who is also a Star Trek fan, ordered a chocolate groom’s cake made in my likeness (I’m wearing a Starfleet uniform with clerical collar because I’m “Starfleet Chaplain Poteet”). 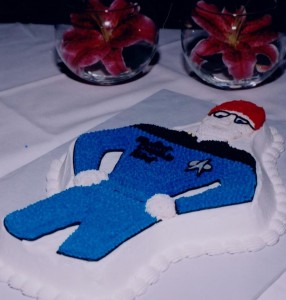 My beautiful bride sliced into Cake Mike’s neck with great gusto. Thankfully—as Counselor Troi told Data at the end of “Phantasms” when she presented him with a Data-shaped baked dessert—“Sometimes a cake is just a cake.”

I don’t think God requires us to give up dessert during Lent, but I do believe practicing such traditional Lenten disciplines as fasting, prayer, and alms-giving can prepare us for an even richer, more festive celebration of Christ’s Resurrection at Easter.

What are some of your favorite nerdy desserts?