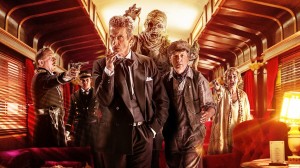 More than halfway through series eight, Doctor Who remains firmly on track. An artful and entertaining homage to Agatha Christie and old-fashioned mummy movies all at once, “Mummy on the Orient Express” also offers many mysteries to unwrap (sorry, I couldn’t—well, I didn’t—resist).

The Doctor and the Great Physician

When the Doctor is unmoved by Professor Moorhouse’s death, Captain Quell chides him, “For a doctor, you have terrible bedside manner!” Yet soon after, as the Mummy places its bandaged hands on Quell’s head, he admits his death is “not a bad way to go: blood pumping, enemy at the gate… I thank you, Doctor, for waking me up.” Instead of manipulating Quell into being an unwitting sacrifice (as he did Ross in “Into the Dalek,” and as he—perhaps—planned to do to Maisie Pitt this week), the Doctor encourages Quell to be an active participant in making his death serve a greater good. That encouragement is exactly the prescription Quell needed.

The Doctor again proves himself a skilled healer moments later, when he realizes the Mummy’s identity. This season’s preoccupation with soldiers continues as the Doctor speaks the “magic word” of surrender to this last fighter of a forgotten war. The Doctor’s words bring peace.

And, of course, whatever his initial plan for Maisie, the Doctor saves her by taking her pain and guilt upon himself.  As a sci-fi Christian, how can I not think of the Suffering Servant, who bore our afflictions and endured our pain (Isaiah 53.4)? The Doctor hasn’t been very Christ-like this season, but this week he had his moments. 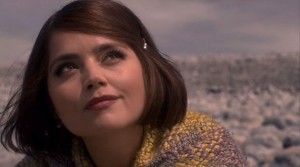 In “Into the Dalek,” Clara claimed the Doctor was just one of her hobbies. It turns out that was her way of saying, “I can quit any time I like.” Clara is addicted, if not to the Doctor himself, then to the life he leads, making dangerous, difficult, “impossible” choices, day after day.

It’s now hard not to feel a sense of dread about Clara’s ultimate fate. We witnessed a similar dynamic not long ago. In “The Power of Three,” Amy and Rory had all but decided to quit their TARDIS travels before Brian encouraged them to keep going. They did—and, the very next week, the Weeping Angels zapped them both back, for good, to 1930s New York.

At least we know the Ponds lived a full and happy life. I’m not sure we can expect Clara will do the same. The Doctor has compromised her ethical integrity. She lies to Maisie about whether the Doctor can save her, and then doesn’t fully accept responsibility for that choice: “You made me lie,” she says. The Doctor can do a lot, but he can’t make someone lie. (He’s plenty good at lying all on his own.) Clara could have put the Doctor on the phone with Maisie, to lie to her himself. Or she could have given Maisie the chance to make her own fully informed choice (as she herself was given the opportunity to choose only last week). The fact that the Doctor does save Maisie doesn’t mitigate Clara’s moral culpability. The Doctor hasn’t just made her his accomplice: He’s turned her into himself—as Rory accused the Doctor of trying to do with him in “The Girl Who Waited”: “This isn’t fair! You’re turning me into you!”

Clara told Danny, in “The Caretaker,” that she travels with the Doctor because “it’s amazing… I see wonders.” But at what price? “For what will it profit them,” Jesus asks, “to gain the whole world and forfeit their life? Indeed, what can they give in return for their life?” (Mark 8.36-37). Like Clara, we’re all tempted to make moral compromises—some small, some large—for what we wrongly perceive as gain. Morally compromised characters on Doctor Who (apart from the title character) usually get their just desserts. In real life, we may or may not “get away with” moral compromises—but, ultimately, God sees and judges all.

What would you want to say and do if this episode’s (wonderful) recurring clock graphic was counting down in the corner of your life? How would you react if you only had 66 seconds more to live?

In “The Caretaker,” the Doctor told Courtney, “Human beings have incredibly short life spans. Frankly, you should all be in a permanent state of panic. Tick tock, tick tock.” This week’s adventure underscores that remark. Although the Mummy turned out to have an actual identity, it also, like all mummies, serves as a powerful metaphor for death. “No matter how far you run,” observes Moorhouse, “it’s always right there behind you.” The professor’s description reminded me of another wise man’s words. “The same fate comes to all,” observes Qohelet the Teacher, (Ecclesiastes 9.2). Qohelet knew running can never put enough distance between mortals and the grave, for “the race is not to the swift” (9.11).

Because of what happened in a garden tomb two thousand Easters ago, Christians believe God can and does give new life beyond the grave. Nevertheless, we hold this earthly life is precious, because it is God’s good gift. So we pray, along with the psalm-singer, that God will “teach us to count our days that we may gain a wise heart” (Psalm 90.12). None of us know which 66 seconds will be our last, so we must live each second as fully and use each second as faithfully as we can.

Do you think the Doctor really “saved everyone,” as Clara believes? Yes, we see Perkins in the TARDIS–but only Perkins, and he turns down the chance to become a Companion because, in his words, “That job could change a man.” Granted, he’s an insightful guy; but might he also have just seen the Doctor making an “impossible choice” that scares him away?

We’ll never know. The episode’s final, “Lady or the Tiger?”-esque moments are masterfully scripted and perfectly acted, and will keep fans guessing and debating for a long time. Like Clara, I’d like to believe the Doctor was only “pretending to be heartless.” But she has become really good at making excuses for the Doctor. I think I’ve become not half-bad at it, too.

Is that the first step in becoming his accomplice, as Clara has become?

And what, if anything, does becoming an accomplice for a manipulative, amoral (and occasionally immoral) fictional character say about how much or little it would take to become such an “accomplice” for a person like that in real life?