There’s a lot of fun, cool, exciting stuff that makes the nerd hair on the back of my neck stand up in the teaser trailer that debuted yesterday for Rogue One: A Star Wars Story:

But Felicity Jones as Jyn Erso commands the most attention. 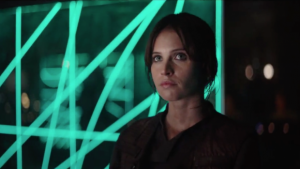 I know nothing about Jyn Erso beyond what this trailer tells and shows us, but I know I like her already. She reminds me of Rey: a tough, smart loner who’s used to fending for herself. Jyn also reminds me of Ezra from Star Wars Rebels. She’s got a talent for finding trouble—and, like Ezra (at least as of this writing, when Rebels’ second season has just wrapped up), she may be facing a close encounter with the Dark Side of the Force. Assuming the trailer’s close is a true clue rather than mere misdirection (granted, not a safe assumption), the ominous chords of “The Imperial March” underscoring the sight of Jyn in a TIE pilot’s uniform suggest that her mission to find the Death Star plans will put her at risk of losing herself.

“What Will You Become?”

Forest Whitaker’s question at the trailer’s end—again, presumably directed to Jyn—raises the same disturbing possibility: “What will you do when they catch you? What will you do if they break you? If you continue to fight, what will you become?”

We haven’t seen Star Wars ever really take on the truth that war changes people.

The prequels hint at it. We watch the Jedi change from peacekeepers to soldiers. We see the Republic die (“to thunderous applause”) and rise in mutated form as the Empire. But neither the Jedi nor the Republic are institutions in their prime when the prequels start, so we never feel the full force of their downfall.

Anakin Skywalker changes during the prequels, too, but his change isn’t driven so much by the war as by his own fears of losing Padme and his desire for control. (Of course, the animated Anakin, on TV’s The Clone Wars, is a much more engaging character than live-action Anakin, so perhaps war changed him by bringing out his best.)

Certainly, war changes no one—not one person—during the classic trilogy. The rebels are heroes and the Imperials are villains, from the first frame of Episode IV to the last frame of Episode VI. Yes, Darth Vader experiences redemption—but because of the internal conflict Luke senses within him, not because of the war itself. (I suppose Lando becomes a bona fide hero as a result of his wartime experiences, but, considering he plays key roles in both rescuing Han and destroying the second Death Star, he doesn’t register much as a character in Return of the Jedi.)

The Force Awakens gives us our first substantial look at war changing someone in the Star Wars universe. FN-2187 refuses to participate in the slaughter on Jakku after watching his comrade die. The Force seems to be at work, too, in Finn’s case, but the bloody smears his fallen brother-in-arms leaves on Finn’s helmet mark the first honest acknowledgment of war’s high cost in a Star Wars movie. Still, even Episode VII focuses more on changes motivated by other factors. Leia and Han changed because of their broken relationship. Ben Solo became Kylo Ren, not because war raged across the galaxy, but because Snoke led him astray. Luke retreated into seclusion after his fledging Jedi revival was destroyed—a devastating but isolated battle, not a campaign in a star-spanning conflict (at least, so far as we currently know). 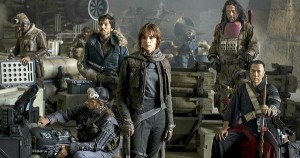 I admit I may be reading too much into the Rogue One teaser trailer—but what else are teaser trailers for? I’m intrigued by the possibility that Jyn Erso may represent Star Wars’ first onscreen in-depth examination of how war can change someone.

In the Star Wars universe, war is a constant fact of life (hence the franchise’s title). The good guys win one day, the villains win the next—generation after generation. It makes for exciting space fantasy, but it also exposes the futility of violence, even violence undertaken for a good cause. Destroy the Death Star—thirty years later, you’re up against Starkiller Base. Can the bloody, “gotta be a way to blow it up” cycle ever be broken?

Apparently not in the Galaxy Far, Far Away. But what about the real world you and I live in? Will Rogue One be the Star Wars movie that finally makes us stop and ask ourselves, during the film itself, “If we continue to fight, what will we become?” That would be a subversive question for a series built on special effects-laden space battles to ask.

We’ll find out in December.

What intrigues you most about the Rogue One teaser trailer? Leave a comment and join the conversation!