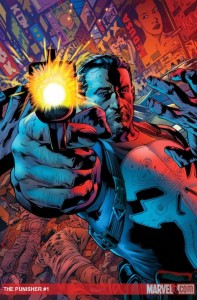 Looks like Frank Castle–Marvel Comics’ kevlar-clad, skull-emblazoned, gun-toting vigilante hero, the Punisher–will soon be  wreaking vengeance on the small screen. Fox has ordered a “put pilot” (meaning the network promises to air the pilot episode; failing to do so brings with it a heavy financial penalty) for a “Punisher” series from ABC Studios and writer-producer Ed Bernero (Third Watch, Criminal Minds). Deadline reports the show will be

an hour-long procedural with a Marvel signature and a new take on one of the comic book giant’s iconic characters, Frank Castle, a rising star detective with the New York Police Department who moonlights as the vigilante Punisher, seeking justice for those the system has failed.

The Punisher is the second comic book property based around themes of judgment and justice in the works at Fox; last month, the network announced its upcoming adaptation of DC’s Spectre.

How do you feel about TV’s interest in high-powered vigilante justice? Maybe the recent flurry of news around such costumed vigilantes as Phoenix Jones makes executives want to strike while the zeitgeist is hot. But how many shows do we need that focus on, and perhaps even glorify, taking the law into your own hands? I guess turning the other cheek (Matt. 5.39) and leaving room for the wrath of God (Rom. 12.19) don’t make for a snazzy elevator pitch (although at least the Spectre is, ostensibly, operating on God’s orders…)

And what, if anything, does it say about our society that the TV industry eagerly sees a market for the Punisher and the Spectre, but still can’t figure out what to do with Wonder Woman, who is in charge and takin’ names with the most powerful weapons of truth and love? Just a thought.

4 comments on “Fox Bringing “The Punisher” to TV”