Is “Kill the Moon” the first “base under siege” story in Doctor Who in which a base comes under siege from itself?

Well, not the base, technically, but the moon—the egg—on which it stands.

The Doctor can barely contain his excitement as he reveals something (whatever it is, it’s not a chicken) living and growing inside the moon. He even smiles, something we haven’t seen him do much this year. He’s delighted to have discovered a unique, “utterly beautiful” form of life. In these moments, Capaldi reminds me of William Hartnell, the First Doctor, toward the end of “The Edge of Destruction,” as he marvels at the almost unimaginably wild beauty found in the cosmos.

The Doctor’s eyes have seen new life, “fearfully and wonderfully made,” being “intricately woven in the depths of the earth”—well, in this case, the moon—and he knows it is good (Psalm 139.14-15). This scene may suggest that the brighter future hinted at in “Time Heist” is indeed on the Doctor’s horizon. It certainly encourages us to appreciate and revere life.

Peter Harness did not write, and Hermione Norris did not play, Captain Lundvik as a villain. She weighs one “living, vulnerable creature” in space against billions of others on Earth, each one unique and therefore “utterly beautiful” (as the Doctor should have recognized, given his affirmation of Merry Galel in “The Rings of Akhaten”). Lundvik freely acknowledges she’s making an “unfair” choice. “I don’t want to do this,” she tells Clara. “I didn’t want it to end this way.” I believe her.

I also believe she argues more from fear than reason. She has sound reasons for killing the creature: tides are tides, gravity is gravity. Even her hypothesis that heavy fragments of debris would smash into Earth is, while proven incorrect, not unreasonable. But her principal motive is fear. She fears the newborn not-chicken will swoop down, dragon-like, to kill Earth’s children. She fears this mortal life is the only one we’ll ever know.

I sympathize. I’ve done my share of fearing the unknown future. But making decisions and taking action out of fear rarely ends well. Fear forecloses the possibility of what J.R.R. Tolkien called “eucatastrophe”—the happy ending, the “sudden and miraculous grace: never to be counted on to recur.” It can’t be demanded or expected. It also can’t be disallowed.

“Kill the Moon” deliberately evokes contemporary society’s arguments about abortion. It will doubtless be used as ammunition in the “pro-life”/“pro-choice” debate (as though the question were that simple). While I share this episode’s conviction that life is precious, I do not hold that unborn life automatically and always  outweighs all other lives and all other concerns (see rhoetus’ comment below). I do not think every abortion is the result of fearful decision-making, or represents a failure to hold out hope for “sudden and miraculous grace.” I will not condemn anyone who has had to confront such a truly terrible decision. “Why do you pass judgment on your brother or sister?” asks the apostle Paul. Or you, why do you despise your brother or sister? For we will all stand before the judgment seat of God” (Romans 14.10, NRSV). Instead, I’ll apply this episode’s lessons about thinking and acting with hope, rather than fear, to my own life. I know I could stand, like humanity in 2049, to “look up” more often.

Clara gives the Doctor the “what-for” this week I thought she should have last week. How dare he play Pontius Pilate, washing his hands of a difficult and dangerous situation because he can’t be bothered to accept his action’s consequences? No, he did not create the moon crisis, but he involved Clara and Courtney in it, and he learned the truth about the unborn not-chicken. And how dare he act as though, after all this time, he isn’t connected to humanity: “You walk our Earth, you breathe our air; you make us your friend when that’s your mood.” Every other person in that control room needed the Doctor to be a friend, but he turned away—all, it seems, to teach Clara a lesson.

As “Into the Dalek” reminded me of a Star Trek: The Next Generation episode, so did “Kill the Moon.” In “Q Who?,” the super-powerful, super-mischievous wants to teach the Enterprise crew a lesson, so he hurls them across the galaxy, where they make first, disastrous contact with the Borg. Reflecting on the incident later, Captain Picard decides it served the good end of preparing humanity for inevitable conflict with a new foe. “Maybe,” he muses, “Q did the right thing for the wrong reason.”

Although Clara insists the Doctor should “damn well help us when we need it,” the fact remains that she made the right decision without him. And, “prat” though he is, the Doctor is right to say, “Some decisions are too important not to make on your own.” We can’t forever allow someone else to make our decisions and set our course for us. At some point we have to accept responsibility for our lives. As Danny tells Clara, we only truly become wise and grow when we have, and survive, “a really bad day.”

Did you notice the novel Clara’s students were assigned this week? On her classroom’s board is a quotation from Charles Dickens’ David Copperfield (the title written in capital letters to get our attention): “Whether I shall turn out to be the hero of my own life, or whether that station will be held by anybody else, these pages must show.” Clara has considered the Doctor her hero (Robin Hood told us so). Danny Pink wants, to some extent, to be Clara’s hero. But Clara must hold that station for herself.

As a fan, I don’t think Clara’s shown any problems being a hero, so this current character arc doesn’t quite work for me. I find its insight, however, valid. It also makes theological sense. It’s easy for me to assume God is the kind of friend Clara wants the Doctor to be: using all those omni-attributes—omniscience, omnipresence, omnipotence—for my safety, my comfort, my good. I’d like God to save me from really bad days. I wouldn’t mind Jesus stepping in whenever I face difficult or dangerous situations. In fact, if you ask me (he hasn’t), now would be a pretty good time for that “new heaven and new earth” we read about in Revelation to show up.

As the old hymn says, we do have a friend in Jesus—but not that kind. I don’t think he goes around kicking the “stabilizers” off our “bikes,” as the Doctor does to Clara, but neither does he always, or even usually, rescue us when we make a mistake. But he has shared our human life. He has walked our Earth, breathed our air—looked up at our moon. He has bound himself to us; no malleable mood of friendship with him. He promises to stay with us through the bad days and the tough times: to comfort, guide, strengthen and, in the end of all things, save. “Because he himself was tested by what he suffered, he is able to help those who are being tested” (Hebrews 2.18). He helps us become—well, not heroes, but people always maturing in love for him and for our neighbor, who show that love in action. Some people might consider such action heroic—good works that move them to give glory to our Father in heaven (Matthew 6.15)—but it’s really simply evidence that we’re finally becoming who God created us to be. 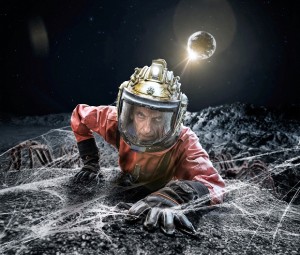 Growth can be messy, and sometimes ugly. I think we’re watching the Doctor’s messy, ugly growth toward the person we know he is capable of being: never cruel or cowardly, never giving up, never giving in. It’s appropriate that “Kill the Moon” was about a birth. With series eight, we’re watching the Doctor’s birth pangs and growing pains as he “hatches” into his brand-new, post-Trenzalore life, a life in which—I trust—he will again be a good man, maybe even a hero.

Of course, it’s possible, as Psi said to Clara in “Time Heist,” that I’ve just gotten really good at making excuses for him.

NOTE: As always, the positions I state in this essay are mine alone, and do not necessarily reflect those of other writers for The Sci-Fi Christian.