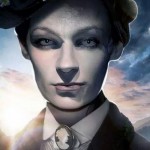 So here’s a theory about the mysterious Missy, self-appointed “God” of the “Promised Land” (a.k.a. Nethersphere) to which deceased characters keep departing this season: She is the Doctor’s daughter.

No, not Jenny, the super-soldier derived from the Doctor’s DNA in an episode a few seasons back. I mean the Doctor’s real daughter—biological or adopted, the girl he claimed as his child. We know about his granddaughter, Susan; she was his first companion in the TARDIS (she even claimed to have named it), and he mentioned her as recently as “The Rings of Akhaten.” If he has a granddaughter, logic dictates he must be father of at least one child.

I’m guessing, based on his behavior toward Clara in “The Caretaker,” that the Doctor fathered a female child—a daughter who is now, as Missy, getting ready to wreak some havoc on him as payback for what she sees as her terrible childhood. 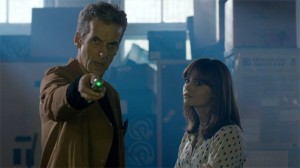 Of course Danny assumes the Doctor is Clara’s “space father.” Throughout the episode, the Doctor acts like an over-the-top overprotective dad. He doesn’t respect Clara’s professional boundaries. He repeatedly speaks ill of her significant other. He arrogantly assumes she’d choose a man who reminds her of him. He bosses her around. Sure, it’s mostly all played for laughs—and I laughed a lot during this episode—but he’s running the risk of ruining things for Clara, and making himself look foolish in the process. He makes Steve Martin in Father of the Bride look dignified by comparison.

One moment that isn’t funny is the Doctor’s imperious demand: “You’ve explained me to him, but you haven’t explained him to me.” If the Doctor were Clara’s father, he might be justified in talking to her that way. But he’s not, so he isn’t.

Why Clara stands for it, I don’t know. Only because the script says she must, I guess. This episode marks a step backward in her development as a strong, independent character. The Clara I’ve seen in series eight, to this point, would have told the Doctor, “I don’t owe you an explanation.” (Didn’t she call the Doctor one of her “hobbies,” after all, in “Into the Dalek”?) This episode defines Clara exclusively in terms of the men in her life—specifically, her fear that she’ll upset and lose them. Of course, wanting to spare the people we care for pain and wanting to preserve important relationships are legitimate concerns. But this episode’s Clara was so flustered and fretted so much as to seem a different person than she has been since “The Day of the Doctor.” And at the end, she’s promising Danny she’ll tell him when she needs his help? She’s committing herself to letting him know when he needs to rush in and save her if the Doctor lets her down? Again: knowing when we need help is no weakness. Scripture tells us that bearing each other’s burdens fulfills Christ’s law (Galatians 6.2). But if the Doctor disappointed the Clara I’ve seen, she would find a way to save herself and decide her trips in the TARDIS were over for good. 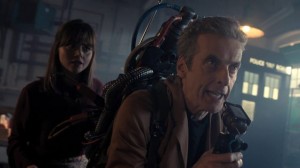 The Doctor, on the other hand, stayed perfectly in character, even as every stereotype of the stupid, smothering father you’ve ever seen, all rolled into one. I saw so much of William Hartnell’s Doctor, the very first, in the Doctor this week, from the hysterical “Go Away Humans!” placard he made (“Never lose your temper in the middle of a door sign”), to the way he belittled Danny (not so different from his belittling of another male Coal Hill teacher, Ian Chesterton, fifty years ago), to the times he unashamedly praised himself (“I’m invisible and I’m incredible!… There’s a lot to estimate”). And, as Danny recognizes, even the Doctor’s overbearing attitude toward Clara is motivated by concern for her: “I need to be good enough for you. That’s why he’s angry—just in case I’m not.” Good intentions don’t excuse bad behavior, especially not from parents—the apostle warns fathers, “do not provoke your children to anger” (Ephesians 6.4, NRSV)—but sometimes they make bad behavior understandable.

And if Missy had to grow up under the Doctor’s roof, I could understand, without excusing, why she’s plotting mischief against him now. Perhaps she brought a boy home once on Gallifrey, a boy he didn’t like, and he acted then to her as he acted this week to Clara. Maybe Missy’s beau was even one of those “military idiots” the Doctor now so despises, like the boys who laughed at him when he was afraid, crying out in the barn. Could that be why she called him her “boyfriend” in “Deep Breath,” as an ironic reference only she would understand, reminding her why she’s become her father’s newest nemesis?

My daughter is seven years old. Her biggest interests include astronomy, American Girls and Frozen. She plays soccer and is learning to play the violin. She thinks boys are “so annoying.” I expect that will one day change. God give me strength not to provoke her to anger when she brings that special someone home to meet dear old Dad! Don’t let me be like the Doctor!