I never followed the Star Wars Expanded Universe (now “demoted” to “Legends” status), but I have been following the Disney/Lucasfilm story group’s efforts to create a coherent pre-Episode VII canon, at least in the Marvel comic titles. March’s books, in my judgment, came in like something less than whatever the Galaxy Far Far Away’s equivalent of a lamb might be, but roared out like a rancor.

Star Wars #3 (“Skywalker Strikes,” Part 3) – Marvel’s flagship Star Wars title checked in this month with a visually spectacular but overall slight installment. The issue is full of huge, action-packed panels. I enjoyed watching Chewbacca unleash some righteous Wookiee rage on a bunch of purple, tentacled, squishy scavenger beasts; and the sight of Darth Vader bringing down an AT-AT with his lightsaber is impressive. Whole pages glow with colorist Laura Martin’s vivid reds, oranges, and yellows as explosion after explosion engulfs the action. John Cassaday’s art enthusiastically embraces a big-budget blockbuster aesthetic. In the end, however, I felt as though I were simply watching writer Jason Aaron play with his favorite Star Wars toys. He does deserve credit for scripting all the breakneck action in this issue. I only wish it had also advanced his story further. I would have also welcomed additional character development. We get a richly ironic moment in which Luke laments that he will never be the Jedi his father was; but other character beats fell flat. Watching a dismantled C3PO bewailing his fate only apes The Empire Strikes Back; and Han and Leia’s near-profession of love rings false this far in advance of Episode V. Aaron hasn’t earned it. The issue’s final few pages promise intrigue involving the late Ben Kenobi in this story arc’s back half; hopefully, the series will make good and finish strong. 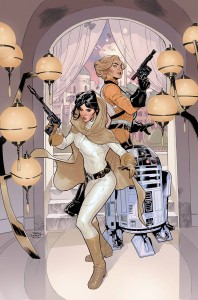 Princess Leia #2 – After a serviceable but semi-disappointing first issue earlier in the month, Mark Waid and the Dodsons’ tale of Leia’s search for the “orphans of Alderaan” accelerated into high gear with its second. Still coming to terms with her survivor’s guilt, Leia, along with R2 and still-fascinating new character Evaan, seek a band of Alderaanian musicians who’ve made their home on Naboo. (That setting affords us a lovely “grace note,” by the way, when Leia sees a stained glass window honoring the late Queen Amidala.) Waid capably handles the main plot, which stars a Lando-like Alderaanian noble named Junn, whose trustworthiness remains in doubt for most of the book. Where Waid really delivers, however, is in his characterizations. A flashback to Leia’s childhood as heiress to Alderaan’s throne helps us feel the weight of all she has lost when the Empire destroyed her world. (As Luke fears he’s failed his father in Star Wars #3, so Leia fears she has failed hers here—a nice symmetry between the two titles this month.) As Waid brings us back from the past into the narrative present, we understand that we are watching Leia redefine what being a princess is all about. In addition, we empathize with Pareece, a club owner caught, as are so many women in time of war, between only bad choices. The issue ends with the revelation of a potentially devastating threat to Leia’s quest to gather Alderaan’s survivors. With Waid’s crisp and sensitive script and the Dodsons’ warm, romantic art (it reminds me of Adam Hughes’ work on Fairest in places), Princess Leia’s sophomore issue is far more rewarding than its freshman one. 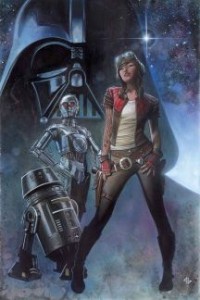 Darth Vader #3 – Not unexpectedly, after its dazzling debut and strong second installment (February 25), Kieron Gillen and Salvador Larroca deliver the crown jewel of the month in Marvel Star Wars. Their chronicle of the Dark Lord’s quest to regain both Emperor Palpatine’s favor and his own power is a standout achievement in every way. This issue may long be remembered for introducing readers to the smart and sassy Doctor Aphra. She’s who Indiana Jones would be if Indy were a woman with mad computer hacking skills, like Skye on Agents of S.H.I.E.L.D. Gillen gives her some fantastic lines: She confesses to Vader, at one point, “You make me nervous. There’s something about tall, dark and able-to-kill-me guys that make a girl nervous.” Larroca draws her with a blend of sensuality and innocence often seen in sci-fi comic book women, but he never crosses any inappropriate lines. He uses Aphra’s facial expressions and body positions to win our sympathy for her. As she kneels before Vader in a confused and resigned submission, asking him, “You’re my next mission, aren’t you? And the next, and the next,” our hearts can’t help but break. How easily, how effortlessly, we often allow evil to pull us in; it can happen so fast, as it does for Aphra.

And make no mistake: though she is a sympathetic character, she’s using her talents for ill. Some of the issue’s most effective pages feature the droids she reactivates, a literally and figuratively dark parody of C3PO and R2D2 named Triple Zero (don’t shake this protocol/assassin droid’s hand; the resultant electric jolt might kill you) and BT-1 (who’s also a tricked-out nightmare version of the grumpy but loveable Chopper from TV’s Star Wars Rebels). Like Leia in Princess Leia #2, Vader here is gathering allies for a planet-hopping quest; his mission, however, is certainly not to save, but to destroy. Impeccably crafted, this Darth Vader series is destined to remain a Star Wars fan favorite for years.

Those are my reactions to March in Marvel Star Wars. I’d love to know yours! Sound off in the comments below, and let’s meet back here when it’s time to talk about April’s showers of new Star Wars comics.