What does Han Solo have to do with the harrowing of hell?

O Key of David and Scepter of the House of Israel, who opens and no one shuts, who shuts and no one opens; Come, and bring forth from prison the captive who sits in darkness and in the shadow of death.

Cell 2187 in Death Star detention block AA-23 also came to mind. Princess Leia’s jailbreak kicks A New Hope into hyperdrive, and I love the fact that Leia’s no hand-wringing damsel in distress. But I think the plan to get Han away from Jabba in Return of the Jedi offers a theologically richer parable of God’s rescue operations.

Encased in carbonite, hanging on Jabba’s wall, Han is helpless. The smug scoundrel whose very name emphasizes self-sufficiency cannot save himself. He seems beyond all help’s reach. But—as Karl Barth stressed, the Gospel can be in that word, the divine “nevertheless” (hat tip to theology blogger Kent Eilers)—freedom and hope and love have other plans.

Like Christ storming the gates of hell to set the strong man’s prisoners free, Luke and his friends are an army of light invading the darkness. They save one who cannot save himself. They deny his captor a long-coveted prize. They free Han for a new life in which, no longer alone, he serves a righteous cause larger than himself. 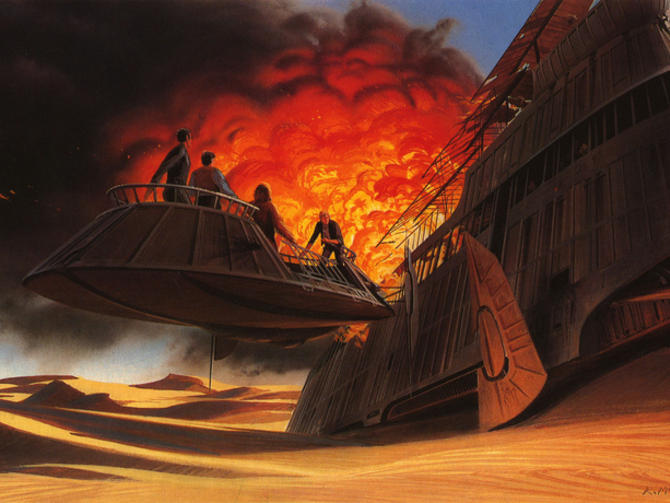 When Jabba’s sail barge and everyone aboard it go up in flames, my reading of this sequence breaks down. Surely, Han wasn’t the only person in Jabba’s court against his will. Maybe Max Rebo needed freeing, too.

But at its core, the great Han Solo heist can remind Christians that, when we are imprisoned in darkness, unable to free ourselves, God sends the Key of David to liberate us.

How have you experienced Christ’s power to set captives free?